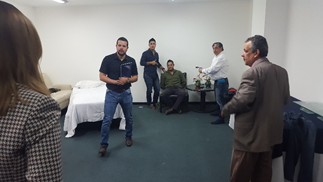 Between February and April 2017, NCSC conducted several workshops on combating the smuggling of migrants and human trafficking in Costa Rica. The workshops were attended by judges, prosecutors, and public defenders from across the country.

The workshops are a response to a growing trend in transnational human trafficking crimes in the region. Costa Rica is a source, transit point, and destination country for men, women, and children subjected to crimes such as sex trafficking and forced labor.

The workshops were organized by the Justice Sector Reform and Prosecutorial Capacity Building Program, funded by the U.S. State Department’s Bureau of International Narcotics and Law Enforcement Affairs. For more information on the program, please visit www.justiciajuvenilca.org.