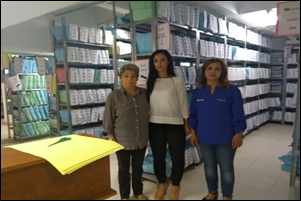 Beginning in August 2018, NCSC facilitated the installation of a custom-made archive management application in six of its eight Model Courts, following testing in two Model Courts and validation by the Ministry of Justice at the beginning of July 2018. The application was implemented by the IT Technician of the Gafsa Court of Appeals, and enables Court Archivists to track and locate archived records and manage records retention in an efficient and transparent manner. The work was conducted under the Improving Court Administration Program, funded by the U.S. Department of State’s Bureau of International Narcotics and Law Enforcement Affairs (INL).

Archivists and clerks have reported significant time gains in retrieving files as the exact row and shelf location can now be identified with the click of a button. Describing the tracking of file location and retention, the Archivist of the Ariana First Instance Court, commented “It is not a punishment anymore.” The application has also contributed to strengthening file integrity and security of records by ensuring their exact location is known at all times, and that any retrieval or return is properly recorded. The Kef First Instance Court General Prosecutor emphasized “the security solutions provided by such an application, which will prevent, or at least limit, the dramatic issue of lost files experienced by many Tunisian court archives.”

The IT Technician of the Gafsa Court of Appeals traveled to Model Courts in Ariana, Bizerte, Kef, and Sousse to install the application and train IT Technicians and archivists on data entry and use of the system’s functionalities. The application is already installed and in use at the Gafsa Court of Appeals and Tozeur First Instance Court. The Tozeur First Instance Court Archivist noted that “time gains are considerable […] once successfully tested in other Model Courts, the next step will be implementation in all Tunisian courts.” The INL Improving Court Administration Program supports reforms and innovations in eight Model Courts to increase efficiency of court operations and citizen access to services.

The Improving Court Administration Program is implemented by NCSC under a 37-month cooperative agreement with the U.S. Department of State’s Bureau of International Narcotics and Law Enforcement Affairs.