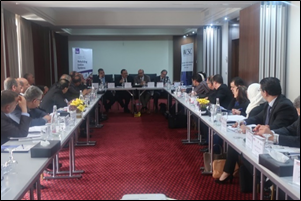 On March 30, April 13, and May 4, 2018, NCSC and Tunisia’s Financial Judicial Pole (FJP), organized three regional workshops designed to sensitize judges and prosecutors to the role, jurisdiction, and legal and operational framework of the FJP. The FJP was officially established in December 2016, to serve as a specialized investigative, prosecutorial, and adjudicative arm of the Tunisian judiciary for corruption, money laundering, and other complex financial crimes.

101 Court Presidents, Chief Prosecutors, and Senior Investigative Judges from all of Tunisia’s first instance and appellate courts attended the workshops. FJP representatives shared information on jurisdictional criteria, the legal framework governing judicial management of complex financial crimes, and operational challenges. Debates were highly interactive and enabled FJP representatives to clarify the parameters of application of the law, as well as to collect input on legislative reforms and practice guidelines that would contribute to the functionalization of the FJP and the effectiveness of the fight against corruption. A final workshop is planned in Tunis on June 29, to consolidate recommendations prior to referral to the Government of Tunisia for action.

NCSC is present in Tunisia as the U.S. Department of State’s implementing partner for two programs funded by the Middle East Partnership Initiative (MEPI), and the Bureau of International Narcotics and Law Enforcement Affairs. The workshops were organized through the MEPI-funded Empowering the Judicial Financial Pole Program.