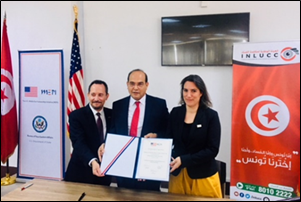 Starting in September 2018, NCSC’s Increasing Accountability in Tunisia Program, funded by the Middle East Partnership Initiative (MEPI), was expanded to assist the Tunisian Anticorruption Agency (INLUCC) with the implementation of a new law on the disclosure of assets and interests. Assistance was formally kicked off at a ceremony chaired by the INLUCC President, Chawki Tabib, and the U.S. Ambassador to Tunisia, Daniel Rubinstein. During the ceremony, NCSC and six local organizations funded by MEPI, signed Memoranda of Understanding with INLUCC.

The new asset disclosure law, which was promulgated by the Tunisian Government in August 2018, requires public sector officials in the executive, legislative, and judicial branches to declare assets and interests. The law also requires declarations from various constituents of civil and political life, including representatives of political parties, professional associations, unions, and registered civil society organizations. INLUCC is responsible for receiving, verifying, and investigating declarations. The law strengthens transparency in public life and is expected to facilitate the identification of illicit enrichment and conflicts of interests.

The Increasing Accountability in Tunisia Program is implemented by NCSC under a 39-month grant agreement with the U.S. Department of State’s Middle East Partnership Initiative.